Corporations are demanding more and more functionality from all of their IT (information technology) systems and meta data repositories are no exception to this rule. In previous articles I have discussed the architectural concepts that are be applicable to most any meta data repository effort. This month’s column will address the more complexed architectural challenges that arise with implementing a meta data repository that requires more advanced functionality. While most repository initiatives do not attempt to implement these features, they are certainly the type of functionality that is getting demanded from corporations. It is also important to note that these concepts can be implemented separately or in-conjunction with one another.

This architecture is highly desirable for two key reasons. First, it allows vendor tools to share meta data. This is especially desirable in the decision support marketplace. Most corporations that have built a decision support system did so with “best-of-breed” tools, as oppose to integrated tool sets that are supplied by one vendor. However, these tools are not integrated with one another and do not communicate easily. Even those tools that can be integrated traditionally require a good deal of resource intensive manual programming in order to share data. This is why both Microsoft with the Open Information Models (OIM) and Oracle with the Common Warehousing Metadata (CWM) have looked to resolve this situation by providing a meta data architecture that third party vendor tools can plug into to communicate (share data) with one another. Second, bi-directional meta data is attractive to corporations that want to implement a meta data repository on an enterprise-wide scale. By enterprise-wide meta data I mean companies that want their meta data repository to store information on all of their IT systems, not just their decision support systems. This would allow a corporation to make global changes in the meta data repository and have those changes sweep throughout the enterprise. 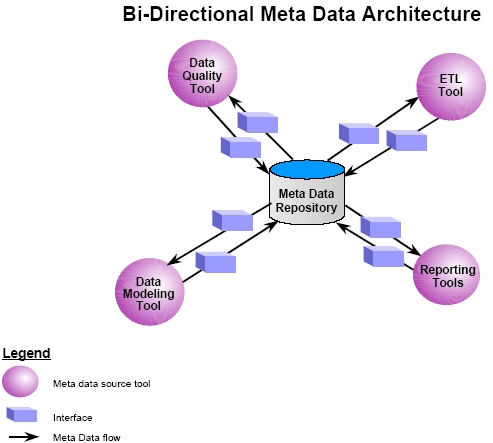 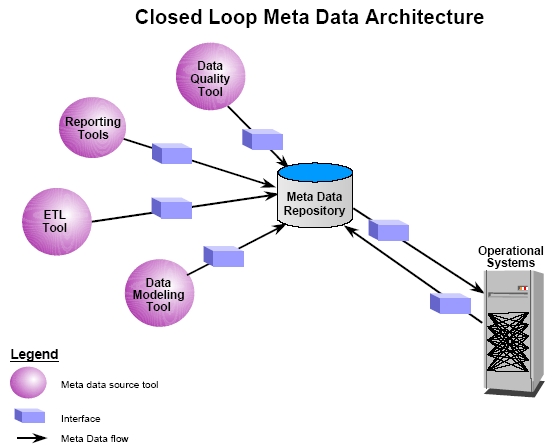