In part one of this series, I presented the Managed Meta Data Environment (MME) and its six components:

In the second part of this series on the MME I will discuss the Meta Data Sourcing Layer and begin to discuss the most common sources of meta data that this layer targets. 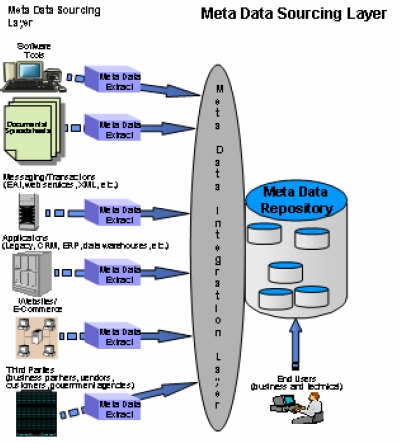 In these situations, the timeliness and consequently the accuracy of the meta data can be compromised. For example, suppose that you have built one meta data extraction process (Process #1) that reads physical attribute names from a modeling tool’s tables to load a target entity in the meta model table that contains physical attribute names. You also built a second process (Process #2) to read and load attribute domain values. It is possible that the attribute table in the modeling tool has been changed between the running of Process #1 and Process #2. This situation would cause the meta data to be out-of-sync.

This situation can also cause unnecessary delays in the loading of the meta data with meta data sources that have limited availability/batch windows. For example, if you were reading database logs from your enterprise resource planning (ERP) system you would not want to run multiple extraction processes on these logs since they most likely have a limited amount of available batch window. While this situation doesn’t happen often, there is no reason to build in unnecessary flaws into your meta data architecture.

A great deal of valuable meta data is stored in various software tools. Keep in mind that many of these tools have internal meta data repositories designed to enable the tool’s specific functionality and typically are not designed to be accessed by meta data users, or integrated into other sources of meta data. You will need to set up processes to go into these tool’s repositories and pull the meta data out.

Part Three of this series will continue to walking through the sources of meta data that the Meta Data Extraction Layer targets.