In part 2, I walked through the Meta Data Repository and Meta Data Management Layers. In part 3, I will conclude this series by presenting the key functions and features of my optimal meta data tool in the MME categories of Meta Data Marts and Meta Data Delivery Layer.

The meta data delivery layer is responsible for the delivery of the meta data from the repository to the end users and to any applications or tools that require meta data feeds to them.

A java based, web-enabled, thin-client front-end has become a standard in the industry on how to present information to the end user and certainly it is the best approach for an MME. This architecture provides the greatest degree of flexibility, lower TCO (total cost of ownership) for implementation and the web browser paradigm is widely understood by most end users within an organization.

This web enabled front-end would be fully and completely configurable. For example, I may want to options that my users could select or I may want to put my company’s logo in the upper right hand corner of the end user screen.

Impact analysis are technical meta data driven reports that help an IT department assess the impact of a potential change to their IT applications (see Figure 1: “Impact Analysis: Column Analysis for a Bank” for an example). Impact analysis can come in an almost infinite number of variations, certainly the optimum meta data tool would provide dozens of these type of reports prebuilt and completely configurable. Also the tool would be able to push” these prebuild reports and any custom built reports to specific users or groups of users desktops, or even to their email address. These pushed reports could be configured to be released based on an event trigger or on a scheduled basis. 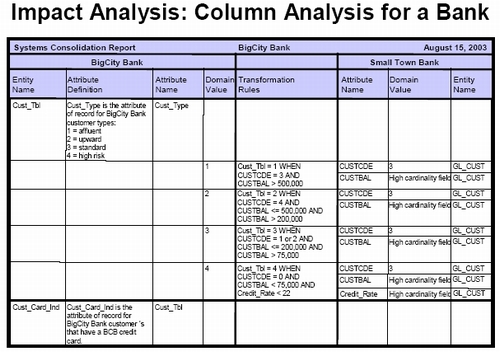 The optimal meta data tool would also have the ability to publish graphics to its web frontend. The users would then be able to click on the meta data attributes within these graphics for meta data drill-down, drill-up, drill-through and drill-across. For example, a physical data model could be published to the website. As an IT developer looks at this data model they would have the ability to click on any of the columns within the physical model to look at the meta data associated with it. This is another weakness in many of the major meta data tools on the market. 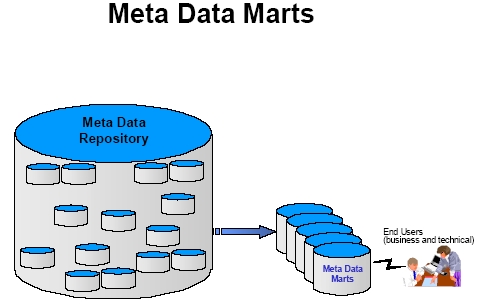 This tool would come with prebuild meta data marts for a few of the more complex and resource intensive impact analysis. In addition, we would have meta data marts for each of the significant industry standards like Common Warehouse Meta Model (CWM), Dublin Core and ISO 11179.

This concludes my three part series on the functions and features that an optimal meta data tool would have.